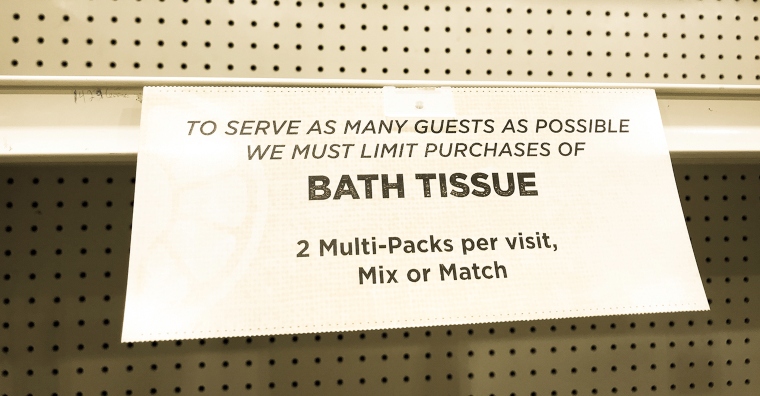 Panic buying has been rife around the globe in wake of the coronavirus pandemic. Customers have been stockpiling goods like hand sanitizer, bottled water, canned goods, paper towels and toilet paper.

The trend has seen stores in some nations ration products. The U.K. is limiting sales of hand hygiene products. Australians have seen restrictions on paper goods. Americans now have to wake before dawn to purchase cases of bottled water, which are now limited to two per customer.

America not alone in frenzy

America isn’t alone in experiencing empty shelves. Mass demand for rice and noodles in Singapore prompted Prime Minister Lee Hsien Loong to assure the public that there was enough to go around. In Auckland, New Zealand, supermarket spending shot up 40 percent in about 72 hours. Shoppers in Malaysia wanting to pad their “pandemic pantries” have driven an 800-percent increase in weekly hand sanitizer sales. All of these places have confirmed cases of coronavirus.

Psychologists explain this phenomenon as “retail therapy,” defined as when, where and what we buy to better manage our emotional state. Experts suggest that the answer may lie in a fear of the unknown and believing that dramatic events warrant a dramatic response — even though in this case, the best response is something as mundane as washing your hands for 20 seconds.

In some ways, the trend of panic buying is a way for people to take back control in uncertain times. Many psychologists have suggested that panic buying can be understood as playing to our three fundamental psychology needs in (1) autonomy—as in the need for control; (2) relatedness—better defined as “we shopping,” rather than “me shopping,” and (3) competence—whereby a level of accomplishment is achieved and making a purchase gives people a sense that they are “smart shoppers.”

In the U.S., people initially received conflicting messages from the Centers for Disease Control and Prevention and President Donald Trump. It was no surprise that people were worried when one organization says the matter is urgent, and another says it’s under control. With the virus present in all 50 states, and daily life has been altered from coast to coast, an unexpected “fear contagion” has taken hold.

Often in times of uncertainty, people can enter a “panic zone” that makes them irrational and—in rare cases—borderline neurotic. In other disaster conditions like an earthquake, tornado or hurricane, people tend to prepare because they know how many supplies they will need. It’s hard to do that with a virus that scientists around the world are still learning about.

Peter Noel Murray, a New York-based member of the American Psychological Association and the Society for Consumer Psychology, is uncertain that persons in authority have the power to calm the panic-buying trend.

“On the emotional side, the answer is self-affirmation,” he said. “In our minds, we know one day we are going to be dead, and the mind deals with it through [seeking] control.” He said there is an “over-estimation” of fear and people’s minds need to respond to those kinds of feelings.

A need for ‘self-affirmation’

“The need for self-affirmation is triggered and that drives us to do unreasonable things like buying a year’s worth of toilet paper,” Murray explained. “It overwhelms the knowledge that we don’t need to be doing that.”

There is a difference in disaster panic and general panic. Toilet paper has become the symbol of the latter. For instance, weather forecasters are able to predict with much greater certainty that a hurricane is barreling toward a certain region. They can provide more information about a cluster of tornadoes about to come your way (though warning times are uncertain at best). With an earthquake, of course, there is little way of predicting that. In these cases, you know it is going to happen and you usually know ahead of time that the emergency will last a couple of days. You’re able to prepare yourself by being somewhat rational with what you buy.

In public health issues we have no idea about the duration and or intensity. Therefore, the messages we receive daily may encourage some to go into panic mode and purchase far more than needed because it’s often the only way to maintain a sense of control.

But why purchase huge amounts of toilet paper? Dr. Dimitrios Tsivrikos, an expert in consumer and behavioral science at the University College London, has for the past few months witnessed this phenomenon and offered an unexpected assessment:

“Because toilet paper has a longer shelf-life than many food items,” he said. “And it’s prominently featured in aisles and is big in size. We’re psychologically drawn to purchasing it in times of crisis. It’s in big colorful packages; the bigger they are, the more important we think they are.”

While the threat is very real and all precautions should be taken to stay healthy, some shoppers may overestimate the risks of dying from coronavirus. Katharina Wittgens, a psychologist with the behavioral strategy agency Innovation Bubble, suggests that shoppers are creating too much anxiety in themselves, which is never good during either clear or uncertain circumstances.

“Far more people die in car accidents or household accidents per year, but we don’t panic in the morning before we go to work about these things,” Wittgens said. “It’s hard to convince our brains of facts, hence why statistics often don’t work.” Wittgens said the surge in panic buying will probably decline after a month when people have had time to think more rationally.

“When we stand in front of empty shelves, people fear that stocks will run out, so they buy far more than they need,” she said. “This becomes dangerous as some goods such as soap, medicines and sanitizers become unavailable for those in immediate need.” And because it is more obvious when the paper goods aisle is empty—compared to smaller items—this can also lead to craze over the item intensifying.

There have been plenty of examples of price gouging in response to the coronavirus pandemic. There have been reports of a 20-pack of face masks costing more than $100 on e-commerce sites like eBay and Etsy. These prices have caused companies to put measures in place to stop speculators from taking advantage of a spike in demand. This month, for example, Amazon announced it removed more than a million basic-needs products for misleading claims and price gouging.

The U.S. government has recommended people stop buying face masks, not only because surgical masks aren’t sufficient protection from coronavirus, but because there may not be enough for healthcare professionals who need them to do their jobs.

Americans have witnessed this type of irrational behavior before. In 1962 during the Cuban missile crisis, when nuclear war seemed imminent, American families filled their basements with enough canned food and bottled water to survive an atomic blast. Then there was Y2K at the turn of the millennium. There were widespread fears of a catastrophic glitch when computers’ internal clock reset to “00” for the year 2000. It was believed that the glitch could crash global markets or send missiles flying across the globe. People just didn’t hoard nonperishables and bottled water, but lots of money: In 1999, the U.S. Treasury was ordered to print an extra $50 billion in the expectation that people would withdraw and stockpile cash.

A better plan than panic buying would be to be prepared year-round for a possible emergency or crisis. It’s also worth keeping everyone else’s needs in mind as these types of events unfold. Stock up on what you and your family need and no more. Avoid the urge to hoard enough supplies to fill a doomsday bunker.

“Anxiety needs to be acknowledged and managed,” Wittgens said. “We do not want complacency, but high levels of anxiety are not useful to prepare [or] prevent catching it.”

Beethoven, the Most Famous Classical Musician of All Time, Was… a...