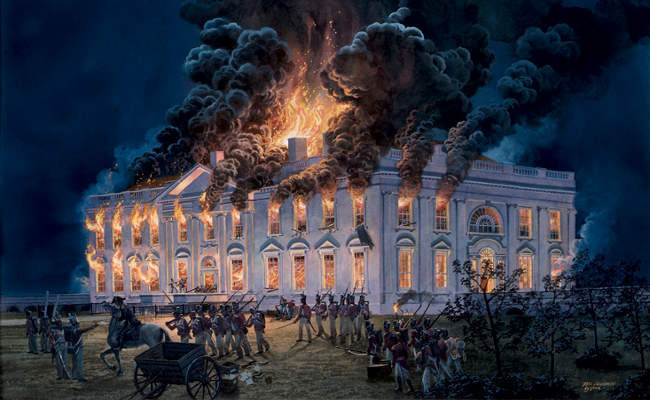 Donald Trump made headlines with his ignorance again when he accused Canada of burning the White House during the War of 1812.

Most school children are taught that the British torched the White House during the attack on Washington, D.C.

What they often are not taught is that the president’s residence was built mostly by slave labor. Nor are they taught that its destruction was carried out by freed slaves known as the British Colonial Marines.

On Aug. 24, 1814, Admiral Sir George Cockburn of the Royal Navy, and commander of the raid upon Washington entered the abandoned White House accompanied by a few of his officers and a squad of Colonial Marines.  The occupiers ate the meal that Dolley Madison had ordered laid out in the dining room in anticipation of her husband, James Madison’s triumphant return after defeating the British at Bladensburg, which lay on the city’s outskirts.  After eating, the British forces piled furniture in one of the rooms and lit a fire that destroyed the executive mansion.

American history books usually do not tell us that the Colonial Marines who set fire to the White House were runaway slaves who Cockburn had trained to be soldiers. This account was written in July 2017 by Andrew Cockburn, an Irish-born journalist who is the Washington editor of Harper’s and a relative of the 1814 emancipator, Admiral Sir George Cockburn.

In May 1814, Cockburn began spreading the word around the Chesapeake Bay region that any slaves who could make their way to a British ship or outpost would be freed, to either fight under the British flag or be transported “as free settlers to the British possessions in North America or the West Indies.”  A training base was established in the middle of the Chesapeake Bay on Tangier Island, and in late May, the Colonial Marines participated in a raid on Virginia’s Eastern Shore where an American artillery battery was captured.

By August, the former slaves had evolved into a well-disciplined fighting unit, and some account state that the Colonial Marines in “Red Coats” were in the vanguard of the British forces at the Battle of Bladensburg where the Americans were routed.  Francis Scott Key witnessed the humiliating defeat of the American troops at Bladensburg, which may have prompted him to express his hatred in the third stanza of what was to become the American National Anthem:

“No refuge could save the hireling and slave

From the terror of flight, or the gloom of the grave.”

He wished death on all the freed slaves who fought alongside the British for their own freedom.

America was a country supported in large part by slave labor.  Its president, James Madison, held African Americans in slavery for his own personal gain. The government mansion where he lived and worked had been built with no concern for the misery of an enslaved people, so it made perfect sense for the Colonial Marines to burn it down.

This was not the first time that enslaved Americans had struck a blow against their oppressors.  In 1775, at the beginning of the Revolutionary War, the Royal Governor’s Palace in Williamsburg, Va,. fell into the hands of George Washington’s forces. Thereafter, it was used by the Americans until it was burned to the ground soon after the Battle at Yorktown in 1781.  A contemporary account by a Charleston, S.C., newspaper reported that the fire was started by “some malicious person” and local accounts state that local slaves were hung for the deed.

The slaves hung for destroying the Governor’s Palace were not among the 6,500 enslaved Americans who were able to escape and fight against their oppression by joining the British military forces. In 1775, the Royal Governor of Virginia promised freedom to any slaves who took up arms against the rebellious colonists. This led to the formation of the noted “Ethiopian Regiment” as well as other African American units fighting under the British flag.

During the Civil War, it is reported that African American Union soldiers under the command of Gen. William A. Wild raided and attempted to burn down the home of the slaveholder and former president of the United States, John Tyler.  Many of the soldiers under Wild’s command had been enslaved in that region of Virginia where Tyler’s plantation was located.  The complete destruction of Tyler’s home was prevented only after a Union naval officer intervened.

None of these acts of destruction can possibly warrant condemnation, given the context within which they took place. All three structures were the result of the unjust enrichment of slaveholders through the evil of human bondage.  All three attacks were during times of war and the African Americans were fighting for a government, as well as against their oppressors.

Some white Americans experience a curious disconnect when it comes to balancing issues of loyalty against those of justice.  They demand loyalty toward an unjust society encased in a national identity, even while that society literally murders those it requires to be loyal. This disconnect existed in centuries past and it exists today.

Today, Colin Kaepernick and other African American athletes are expected to “honor the flag” as a sign of loyalty and respect to a nation that will not effectively prevent its law enforcement mechanism from harassing, humiliating and even murdering people of color.

The Presidential Race Might be Too Close to Call, but the...