From June 19 through the 23, elementary, and junior high boys learned, from experience, the positions that make up football, one of the most popular sports in America.

Quarterback, running back, linebackers, and other skilled positions were taught by former pro, college, and high school players, and coaches. They were even given free breakfast, and lunch the entire week. But for anyone who ever attended the camp, or knows the founder, academics are interwoven throughout the week long camp.

Started by Dr. Carnel Smith 15 years ago, the former NFL player, who is also a product of Toledo’s Scott High School, drives home the importance of academics to all that attend the camp; at least 100 for 2017.

Every day, the participants were given words of the day that they must take home, write the definition down, and be able to use it in a sentence when called on to do so, prior to the commencement of football drills.

Pay attention, following directions, and positive attitude, were the words the kids had to learn. If they couldn’t define, and use the word in the sentence, they would face a tongue lashing that boldly predicted the hardships they would face, in their high school and college careers of football, for not being able to follow directions.

In addition, speakers addressed the boys on various topics; again, before the start of any football drills.

Dr. Smith, who is also the principal at Scott, intentionally designed the camp to reflect the college, and pro football experience.

Unlike some coaches who, if asked what would you like to see the boys take away from this camp, and their response would be centered around football skills, Dr. Smith said, “At this point we’re on track to awarding 56 trophies to the boys who completed, and turned in their homework everyday this week; but I really want to see 100 of them receive a trophy. Here, they’re not given anything; everything has to be earned.”

Christian Johnson, 11, was attending the camp for the first time. “I love it,” he said. “I did all my homework because I want to get better at what I do,” Christian said.

Carnel Smith Jr., 10, has been attending the camp for five years. He said that he’s gotten better at paying attention, and following directions; both skills the quarterback, and wide receiver said will make him a better player at the start of the upcoming football season at his school.

Dr. Smith thanked all the volunteers, and those who attended the fundraisers to make sure the camp operated smoothly. 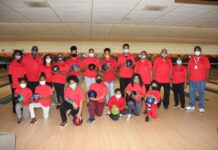