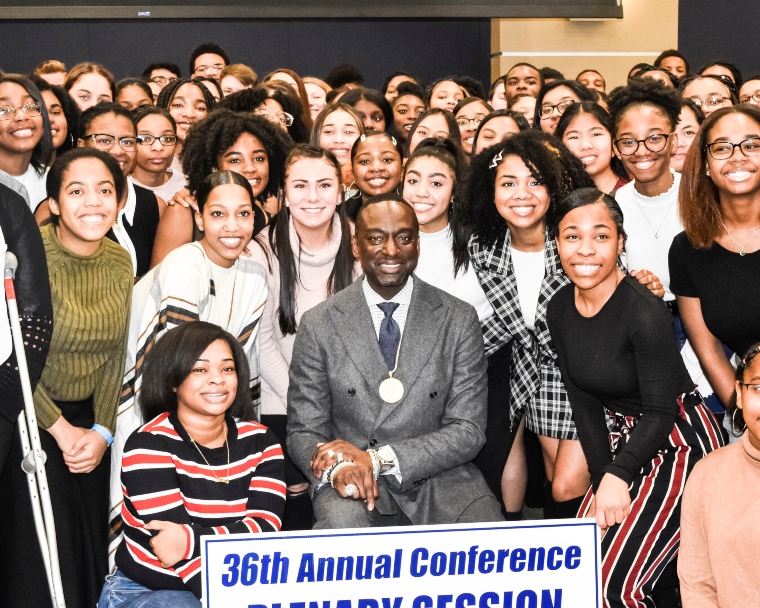 Toledo EXCEL and The University of Toledo [UT] hosted the 36th Annual Conference for Aspiring Minority Youth this past Saturday, January 11 in the Thompson Student Union. The conference theme was Social Justice: A Community Enterprise. Dr. Yusef Salaam of the Exonerated Five, as they are now known, served as both the morning keynote speaker and an afternoon panelist. The panel discussion was moderated by Rhonda Sewell and included Dr. Salaam, UT Professor RaShya Ghee, Cultural Educator Albert Earl, and UT Chief of Police Jeff Newton.

In his morning address, Dr. Salaam shared his experiences as one of the five African-American and Hispanic young men wrongfully accused and convicted of raping and beating a white female jogger in Central Park during the spring of 1989. Dubbed then the “Central Park Five,” Dr. Salaam along with Korey Wise, Kevin Richardson, Raymond Santana, and Antron McCray all served 6 to 13 years in prison before being exonerated of all charges in 2002. Their stories were retold in both a 2012 Ken Burns documentary and the 2019 Netflix mini-series “When They See Us” written and directed by Ava DuVernay.

“The truth of the matter is that we were guilty because of the color of our skin,” Dr. Salaam said. “The challenge then that we face is to rise above the gravitational pull of people’s preconditioned thoughts about what they see. They always say you shouldn’t judge a book by its cover, but everyone judges a book by the cover, [though] the content is what’s most important.”

Dr. Salaam also spoke at length to the resilience of the human spirit in spite of the injustices he and the other four men suffered during their trial, conviction, and imprisonment. He ended his address by reading a poem from his book “WORDS of a MAN: My Right to Be” and reminding the young audience that they were born for a purpose.

“It behooves us to teach that nobody is a mistake. We were born on purpose and with a purpose. God is not through with us,” he said. “That alone gives us the awesome opportunity to look at our lives and begin to turn off everything negative that is trying to keep us in a box.”

During both the conference sessions, the UT student union auditorium was brimming with families and area youth groups including Toledo EXCEL and the Young Men and Women of Excellence from Toledo Public Schools [TPS]. Alina Darden, TPS middle school teacher and the faculty advisor for Young Women of Excellence at Old Orchard Elementary School brought her students to the conference specifically to hear Dr. Salaam.

“I wanted them to gain more knowledge about their civil rights and how they can be violated in this day and age, and I want them to hear the experience of someone who has lived through something that is current and relevant to right now,” Ms. Darden said.

Cheryl Barnett, Assistant Principal at Pickett Elementary (TPS), brought her own daughter Lyrehc Pirtle as well as students from Pickett to the conference. Ms. Barnett said she attends every year but was excited for the opportunity to hear Dr. Salaam share his own story after viewing “When They See Us” last year with her family.

Local government officials in attendance included Toledo Mayor Wade Kapszukiewicz who was extremely pleased to see such a huge turnout. Speaking to the Toledo Journal, Mayor Kapszukiewicz said he could feel the positive energy generated by Dr. Salaam’s presence and hoped that all in attendance would apply the lessons learned to their everyday life.

“We are in highly charged political times. People too often in this country are pitted – us vs. them, red state vs. blue state, black vs. white, Christian vs. non-Christian,” Mayor Kapszukiewicz said.  “In times like these, it is really important to pause and reflect on the injustices that we still face as a society. It is also important to reflect on stories of perseverance and redemption and grace. I hope we all can pause and reflect and learn from the message today.”

The House of Adonis Making A Difference for youth