Special to the Trice Edney News Wire from NorthStarNewsToday.com

(TriceEdneyWire.com) – Three African-American U.S. Senators have introduced a bill in Congress that if passed and signed into law would make lynching a federal crime. It is similar to legislation introduced earlier this month in the House by U.S. Rep. Bobby Rush (D-Ill.). 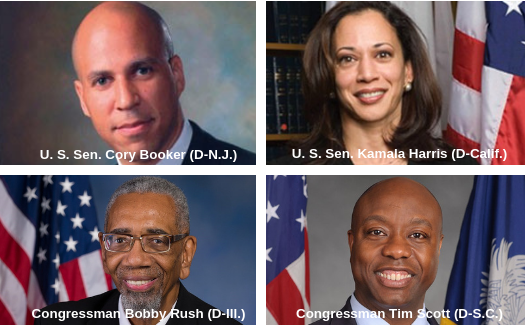 The lawmakers introduced the legislation after The National Memorial for Peace and Justice and the Legacy Museum opened in April.

Lynchings didn’t  just include hanging people without benefit of a trial. They also involved burning Blacks at the stake. And as victims pleaded for mercy, happy onlookers cut off their fingers, hands, heads and – in the case of men – their pensis.

Tuskegee University keeps a record of lynching victims, and the book “At The Hands of Persons Unknown: Lynching of Black America” is an authoritative work on the terrorist murders of Black people.

Philip Dray, the book’s author, said the 1964 murders of  James Chaney,  Andrew Goodman and Michael Schwerner, civil rights workers who were shot to death by the Klu Klux Klan and police and buried in an earthen grave in Neshoba County, Mississippi, was the last lynching in which a white mob collaborated with the police. Normally, law enforcement never investigated lynchings although the names of the murderers were well known.

It was also first time the federal government, since Reconstruction, investigated a lynching case in the South and secured convictions. Tuskegee University reported that the main years of lynching occurred between 1890 to 1937.