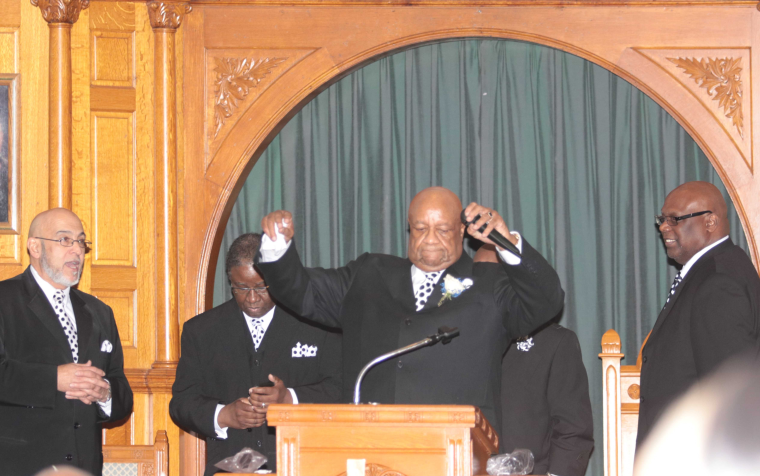 Special to The Toledo Journal with Contributions from Jurry Taalib-Deen

The Rev. Dr. Willie L. Perryman, Jr.  and Jerusalem Missionary Baptist Church, opened this 24th pastoral celebration with an encouraging message entitled: “A Shepherd’s Heart”; taken from Jeremiah 3:15.  Rev. Perryman  eloquently proclaimed that God give shepherds according to His own heart, and indeed, Pastor  Jimmie L. Jordan, Jr.  has demonstrated a shepherd’s heart while serving the congregation of Ebenezer.

Rev. Dr. John W. Williams and the Eastern Star Missionary Baptist Church joined in the celebration bringing a profound message where Rev. Williams delivered the message entitled: “Faithful to your Calling”,  from Joshua 1:7-8 and Jeremiah 3:15.  Rev. Williams gave the clear message that Elder Jordan, Jr. has indeed fulfilled his call serve in these  24 years!  An overwhelming since of worship swept through the sanctuary of Ebenezer Church.

Elder Jordan has served in ministry since 1970 when he delivered his initial sermon on May 19, 1970.  His sermon theme was “Lord of Host”.  He went on to be ordained in December 1972.  In preparation for this pastoral journey, Elder Jordan received his Degree in Theology in 1984,  and went on to attend Wayne State University,Detroit, MI and other educational institutes in order to lead his congregation and the community in striving for excellence, both naturally and spiritually.

Minister Michael Bailey, Sis.Barbara Crowell & saxophonist,  Bro.Arthur Bishop  ministered in song: “Falling in love with Jesus was the best thing I’ve ever done”.   The message in song was fitting for our honoree as it speaks to the theme of Elder Jordan’s pastoral journey.

Bobbie Crowell,Adult Choir Directoress,  at Ebenezer Missionary Baptist Church, told The Toledo Journal that Pastor Jordan is special. “I’ve been a member for seven years, and he teaches straight from the Bible. Having that foundation of strict Bible teaching is our instructions to Heaven,” she said.

“I originally was just coming to visit four years ago, and I ended up staying,” said Elder Will Davis. ”Pastor Jordan’s teachings are a magnet,” he said.

Deacon Fletcher Ballard has been a member for 24 years, and describes Pastor Jordan’s teachings as “Real treat for people.” “When I first met Pastor Jordan, I knew through his teachings that I was supposed to be close to him,” he said.

The congregation was filled with guests and well-wishers throughout the city of Toledo.  Our city officials joined in the services, as Elder Jordan has been a very active support in our community, some of the official guests seized the moment to express their gratitude for the pastoral care that is extended to them as they minister in the political arena in Ohio.

The columniation of this 24th pastoral celebration with Bishop Rance Allen and New Bethel Bountiful Blessings COGIC was  the celebration of thanks to God for the continued pastoral leadership of Elder Jordan. May Pastor Jordan, continue and prosper in all he do according to 2 Chronicles 31:21.

Although the anniversary was a blessed celebration, as described by Pastor Jordan, he said he felt said that his late wife, First Lady, Rosie Jordan was with him to share in the joyous moment.

“If you keep serving the Lord, He will bless you,” he said. Pastor Jordan said upcoming plans for the congregation include beautification of the sanctuary, and increasing the growth of the church.

“The spirit of God is felt within His house when you move to help others in the community,”Pastor Jordan said.