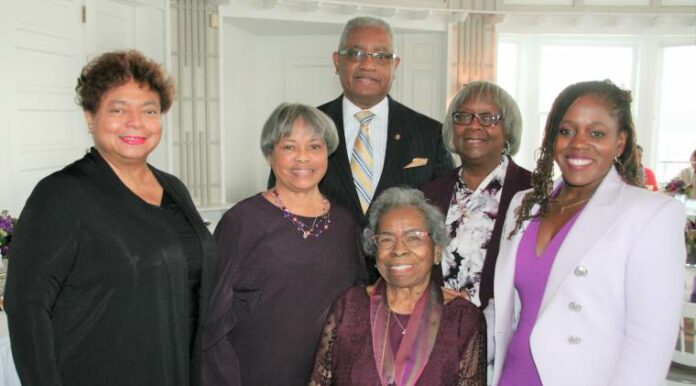 On March 30, her daughter Mrs. Jesse Warren and family had a Saturday morning birthday party brunch buffet for her at the upscale Toledo Club on River Rd. In a room overlooking the peaceful Maumee River flowing by, family members and friends gathered to honor Mrs. Allen and her 100 years of life. Can you imagine all the things she’s seen, done and experienced in a changing world in 100 years? And, especially living in the south, as she did most of her life, certainly there some stories that she could tell.

Mrs. Allen was born March 28, 1919, in Athens, Texas to Dorothy Chancellor Barker and Henderson Barker. At an early age, her family moved to Dallas, Texas. In Dallas, she attended N. W. Harlee Elementary School and graduated from the Booker T. Washington High School in the public-school system. After high school, she went on to attend Prairie View A&M College.

In Dallas, she and her husband owned and operated Allen’s Grocery and Market. They both were generous and kind to their customers, it was not unusual for them to let their neighbors and customers have food on credit until they were able to pay their bill.

Also in Dallas, Mrs. Allen was an active member of her church, “Greater Bethlehem Baptist Church” for over fifty years. There she served in the Senior Usher’s Ministry, Women’s Day Ministry, and Deaconess Ministry. She was also recognized as an honoree for a church Women’s Day Celebration.

Outside of family, church and work, her social and civic activities included volunteering with the American Red Cross, a Notary Public, and a poll worker during elections.

She was also considered by many to be a neighborhood and community leader because of her business acumen. Because of this, she was honored by the Dallas Chapter of the NBAPW Club in the area of Business.

In her spare time, she enjoys hobbies including watching sports games, playing cards games especially Bid Whist and Dominos, and using her computer and tablet. An adventurist spirit, she also enjoys traveling and has been to San Francisco/Oakland CA, South Africa, Hawaii and on trips to visit her grandchildren.

In 2013 she moved to Toledo to live with her daughter and son-in-law, Bishop Clifford Warren and became an integral part of their church, The Church of the Living God where she is known as “Mom”.

About her party Mrs. Allen had only one thing to say, “I’m just so happy’, and about living in Toledo she said with a smile, ‘I love Toledo, all except for the weather!”

Her granddaughter Melanie Gross said of her grandmother, “My grandmother is my rock and my everything. She is such an Amazing woman; she has given back to so many people and enriched their lives. To me, this is the perfect time to give her, her roses while she is still living.”

Michael Byrd’s 40th birthday is a celebration of those in his...

Samuel Young has his first birthday party at 85 years old