With the current political climate in the United States, the local chapter of the National Association for the Advancement of Colored People, NAACP, themed their 103 Freedom Fund Banquet, “Defeat the Hate-Vote. ” Held in the Great Hall of the Stranahan Theatre, 4645 Heatherdowns Blvd, African Americans’ oldest Civil Rights organization focused their event on celebrating accomplishments of young people, and using their expertise to encourage others to get politically involved.

Partnering with Councilman, Tyrone Riley, and the NAACP recognized the winners of the Crispus Attucks Essay Contest that, Mr. Riley founded, and hosts annually. Over 100 young people throughout the county, male and female, black, and white, participated in the contest. Of the 100, 14 were selected as the winners, with each splitting a cash prize of $2000.00.

Then, the organization awarded four individuals with the Freedom Fund Award. Honorees were selected based on community activism, as well as their impact, and the longevity of that impact within the community. The 2018 recipients were Dr. Crystal Ellis, former Toledo Public Schools, TPS, Superintendent, Tina Butts, business owner, and community activist, David Fleetwood, head of Laborers Union Local 500, and Rev. Dr. John Roberts, senior Pastor of Indiana Missionary Avenue Baptist Church.

“Being the Superintendent of TPS was the most rewarding job I had,” Dr. Ellis told the audience after receiving his award. “When I was in that position, I didn’t look at color; I saw all the children as my children,” he said.

When Ms. Butts received her award, she thanked the NAACP, and quickly applauded those whom she works with, for getting people registered to vote.

Serving as the keynote speaker of the event was Zuri Hall, co-anchor of E! News and former host of a variety of MTV shows, as well as Toledo native. In a talk seasoned with humor, and a cheerful personality, the 30 year old spoke about her life in Toledo, and ultimately in Hollywood, where she would host her first television show at the tender age of 25.

Ms. Hall told the audience that most people would think, because she attended Ohio State University on a full scholarship, graduated, and started working in Hollywood, she was financially literate, but she quickly dispelled that belief.

She spoke of being in debt, which started in college with getting credit cards, and racking up that debt. Ms. Hall said that debt followed her to Hollywood, and continued to stress her out. 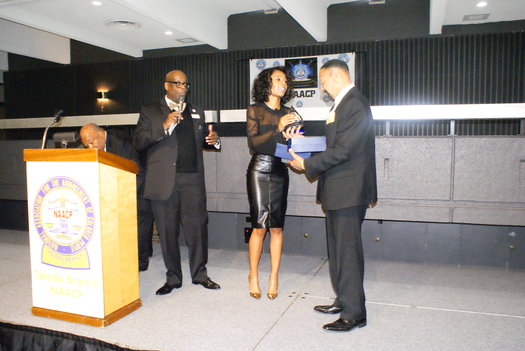 “Thank God that the NAACP offers courses in financial literacy, so others don’t have to go through what I experienced. Financial education lays the ground work for freedom,” she said.

“Now I study candidates and issues like I was back in college,” Ms. Hall said.

“Our big push this year is getting people out to the polls to vote,” Ray Wood, president of the local chapter of the NAACP told The Toledo Journal. “Part of our effort in encouraging people, especially young people, to vote is utilizing, and recognizing the talents of our young people, like Zuri Hall,” Mr. Wood said.