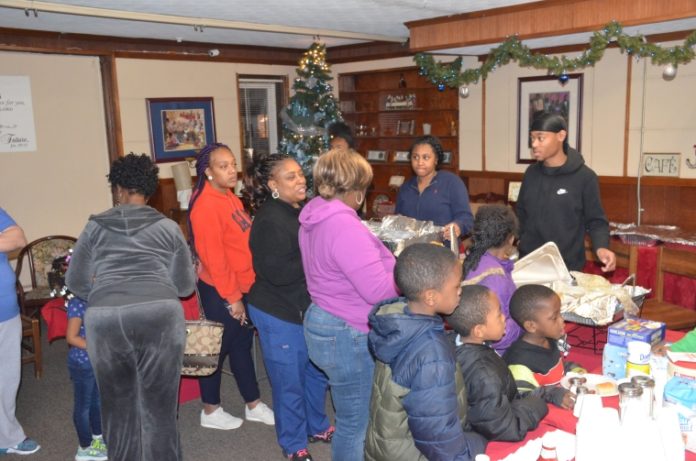 A drive through the streets of Northside Toledo on Friday’s mild evening would have usually been like any other, dark and quiet. Though at Word of Faith Ministries on Stickney Ave near Woodward High school, the scene was brought up by a more energetic and cheerful tone.

Cars parked along the street are packed with youth, eager to join in on the affair. Though before they opened the doors to the church, on the corner of Stickney and Russell, they are greeted by a man and a dolly hand truck, packed with items halfway to its top.

The man says with a welcoming yet weighty voice, “watch yourself now, careful”.

The children obey as the man carries past. Though when they enter into the building, the darkness of daylight’s fall resides and the kids embrace the warmth of festivity.They are greeted by smiles, laughs and warmth. Also, by gifts.

Over 120 families gathered to receive donations of coats, gloves, and food boxes December 19th. It is a tradition that has been going on for seven years in which Franklin Park Lincoln car dealership has moved to provide a holiday contribution effort to the community.

Foods like potatoes, apples, whole turkeys and canned goods, along with newly bought winter clothing, were donated to families in need of assistance.

“We try to give back to the community” says event organizer Mike Colbert, who also works with Franklin Park Lincoln.

Families were also welcomed to a hot meal dinner courtesy of community volunteers. On the menu was a generous selection of well prepared chicken breast, fried potatoes, mashed potatoes and gravy, corn and more served with hot chocolate and tea.

“I just love to cook” said Martin McCabe, who cooked and prepared the hot food. He has been with Mr. Colbert in the annual event’s organization since the beginning. “Unfortunately the world’s gonna keep having poor people”.

Aside from the food and winter wear, local barbers and nail stylists also donated their time and skills for good measure. To the tunes of cheerful music, children were able to get their hair cut and shaped up on the church’s stage and nails polished just off to the side.

“Lots of people hurting” said Rodney Holmes, an elder at Word of Faith who volunteered to help. “This is a gift in and of itself, of giving back. They need help.” Mr. Holmes moves to serve his community in the way he can. As to the vision of Mr. Colbert of Franklin Park, he gives new winter coats to the families of the community, also food by the box.

He does it all with a hearty and welcoming, yet weighty voice. He also does with a dolly, packed halfway to its top.