The fourth annual, Dorr St. Live was held on Saturday, August 25, at the corner of Dorr, and Collingwood. According to the sponsoring agent, the African American Legacy Project,  said it has a mission to document the history of the area, and help revitalize a once, financially lucrative community.

Local entertainment and some from out of town, kept a crowd that, brought their folding chairs to the event, and sat right in the grass, entertained throughout the day.

Food trucks, owned by African Americans, lined Dorr St. to satisfy the hunger needs of those in attendance.

Vendors selling products from fragrances, to unique purses were also on hand. 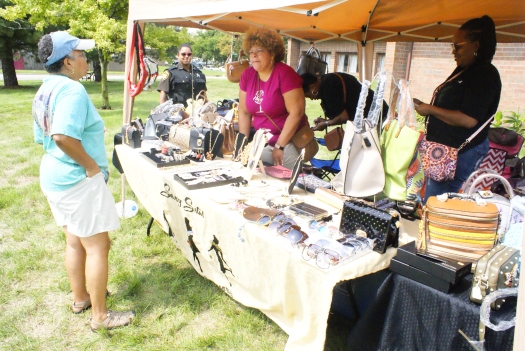 A large wooden board sat in the middle of the grass, and was decorated with African American newspapers from far back as the 1940s.

For Robert Smith, director of the African American Legacy Project, this is all just the beginning of a larger scheme he wants to see come into existence.

“This event is not just about having a good time, it’s about documenting our rich history, and helping to revitalize this community,” he told The Toledo Journal.

Partnering with Lucas County Metropolitan Housing, LMHA, the African American Legacy Project, is documenting the life stories of some of those people who grew up in the neighboring housing projects of the Port Lawrence, Brand Whitlocks, McClinton Nuns, and Albertus Browns, and were successful in life.

Katie Bonds, senior vice president of operations at LMHA said, “It’s important for Toledo to know their history. It’s also important for those who are growing up in those projects to know the success stories of those who came before them; it serves as inspiration.”